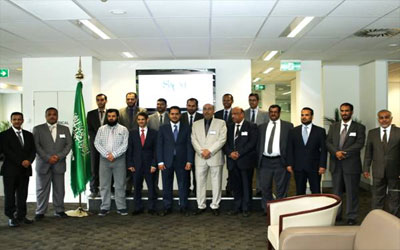 A delegation from Naif Arab University for Security Sciences and the Bureau of Investigation and Public Prosecution of Saudi Arabia visited Saudi Arabian Cultural Mission (SACM) in Australia on Thursday 10th March 2016. Dr. Abdulaziz Bin Taleb, Saudi Cultural Attaché to Australia, and Deputy Ambassador Mr. Mesha’al Alrougi welcomed the delegation at SACM’s premises. The delegation was headed by Major General Dr. Mohammed Hassan Alsarra, Dean of Training College in Naif Arab University for Security Sciences and general supervisor of the visit, and included the head of Bureau of Investigation and Public Prosecution branch in Riyadh Mr. Mansour Saleh Al-Dhalaan. The Cultural Attaché expressed his pleasure with the visit and wished success to the delegation in their visit to Australia.

The Cultural Attaché toured with the delegation throughout SACM’s departments, explaining the role of each department and highlighting SACM’s contribution to enriching cultural and scientific exchange between Saudi Arabia and Australia, and briefed them about the workflow at SACM. The delegation was also briefed about the services and support SACM provides to Saudi students in Australia, and SACM’s initiatives and development programs in educational and cultural fields, especially the events and programs informing about Saudi Arabia. At the end of the visit, the members of the delegation expressed their pleasure to visit SACM, commending SACM’s role in the supervision of Saudi students in Australia. They also thanked SACM’s management for availing the opportunity for the delegation to learn about SACM’s work and services.

The visiting delegation is in Australia to participate in an “Attorney General” training course, and to visit some of Australian courts and departments of investigation and public prosecution and foreign and trade affairs in Sydney, Canberra and Melbourne. The delegation also visited the Saudi Embassy in Canberra and met with Ambassador Mr. Nabil bin Mohammed Al-Saleh, who hosted a dinner in honour of the delegation.