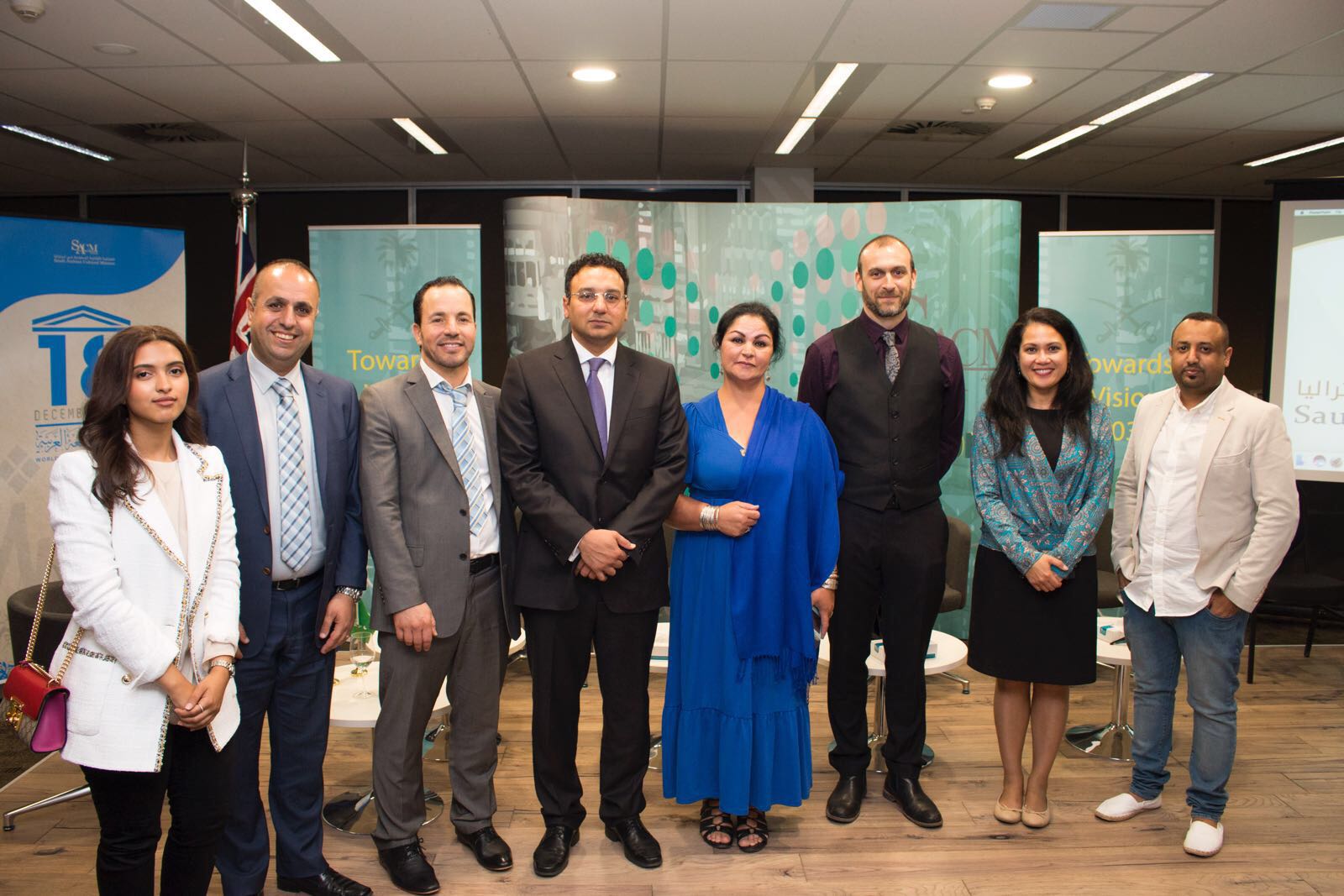 In the presence of Australia’s Shadow Minister for Multicultural Affairs Elizabeth Kikkert, the Secretary-General of Australian National Commission for UNESCO Mr. Adam Illman, and the Saudi Chargé d’Affaires in Australia Meshaal Al Roqi, the Saudi Cultural Mission (SACM) in Canberra organized on Thursday 7th December an event celebrating the World Arabic Language Day 2017 attended by representatives of various institutions, departments and personalities interested in the Arabic language in Australia.

Dr. Mustapha Taibi Associate Professor in Interpreting and Translation at University of Western Sydney spoke about government language policies with regard to accreditation, strategies and practical measures related to the promotion of language, in addition to “family language policy” pertinent to the use of a particular language at home, which reflects the interest of the community and individual ideologies towards the language.

Artist Fatima Killeen participated with an Arabic calligraphy gallery and delivered a lecture about the humanitarian messages conveyed by the Arabic art. Saudi artists Abdulmalik Al-Khalidi and Mohammed Alateeq have also participated with works about Saudi culture reflected in Arabic calligraphy. The event also featured oriental “Oud” and “Ney” performances by the Australian musician Michael Taylor.

The event also included a documentary film produced SACM about SACM’s team visit to King Khalid Primary School in Melbourne, where competitions and activities were organized for Arabic classes. The film also reviewed Saudi Arabia’s efforts in the service of Arabic language around the world. Students from the Islamic School in Canberra also participated with a song about the Arabic language.

The Saudi Cultural Attaché to Australia Dr. Hesham Khadawardi confirmed that SACM organizes events and celebrates international and Australian days, aiming at enhancing the Saudi Arabia’s efforts in disseminating the culture of peace and tolerance and emphasizing the friendly relations and respect between Saudi Arabia and the peoples of the world.

Australian Minister Elizabeth Kikkert praised the presence of SACM in the Australian cultural and media arena, by sponsoring and organizing cultural events aimed at promoting peace and harmony among the Australian community. The Secretary-General of Australian National Commission for UNESCO Mr. Adam Illman also expressed his appreciation of SACM’s cultural efforts, highlighting the need for cultural cooperation between SACM and the UNESCO Commission in Australia.