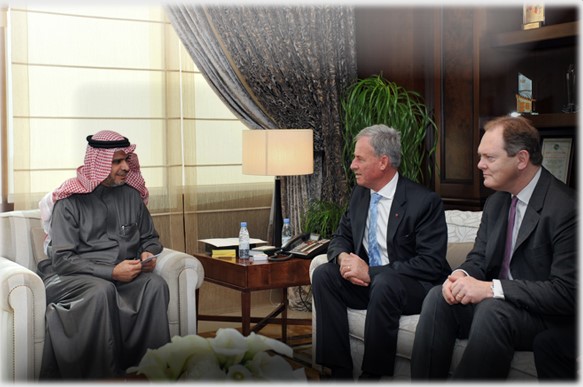 His Excellency the Minister of Education, Dr. Ahmed Bin Mohammed Al-Issa received yesterday morning at his office in the headquarter of the Ministry Mr. Richard Colbeck, the Australian Minister for Tourism and International Education.

The meeting, which was attended by a number of ministry officials, reviewed the ministry’s plan to deploy and train 1000 teachers annually in public education for a number of developed countries sector, including Australia, for a period of six months to one year, in order to take advantage of different methods of education in those countries, and to take advantage of the quality of educational programs those countries have.

Minister Al-Essa, during his discussion with the Australian Minister, also highlighted ways to facilitate Australian student visa procedures in convenience for scholarship students. Minister Colbeck talked about Australia’s international education strategy which stretches for ten years and shall take effect from next year, pointing out that they are keen on the educational, scientific and international research exchange with a number of countries, especially with Saudi Arabia because of its high level of development and the successes achieved by the Custodian of the Two Holy Mosques Scholarship Program.
The visit comes within the framework of the efforts made by the Ministry of Education in the field of international co-operation and exchange of expertise with international educational institutions and organizations.