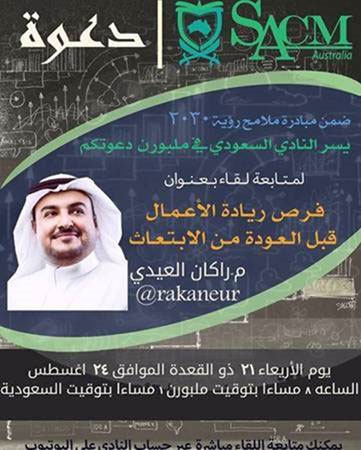 On Wednesday, 24th August, 2016, the Saudi Arabian Cultural Mission organized the first forum as part of the periodic meetings program. The forum was organized in coordination with the Saudi Student Club in Melbourne, under the title “Entrepreneurship Opportunities before Completion of Scholarship”. The forum was held, in coordination with the Saudi Student Club in Melbourne as part of SACM’s initiatives about features of Saudi Arabia’s Vision 2030. Engineer Rakan Bin Mohammed Al Eidi, who is a member of the Saudi Entrepreneurship Society and a member of the board of directors of the Global Entrepreneurship Week, presented directly from Saudi Arabia through the Club’s official channel.

Discussions were centred on the concepts and importance of entrepreneurship world widely. Engineer Al Eidi put forward some ideas about the benefit by scholarship students from opportunities in the field of entrepreneurship in the country of their study, and urged them to transfer those ideas to Saudi Arabia and try to implement them in reality. He also referred to the attention paid by many countries to entrepreneurship programs, saying those kinds of programs have now become the most important economic pillars. Engineer Al Eidi also answered students’ questions, as the forum was viewed online by a large number of Saudi students in Australia.

Entrepreneurship, nowadays, attracts a growing global interest and has become one of the key drivers of economies of the developing countries. Entrepreneurship empowers young people and develops their abilities, as well. It also helps them to invest in the opportunities available to them to establish their own businesses and projects.

In this respect, SACM’s plans include holding a number of informative meetings/forums about the features of Saudi Arabia’s Vision 2030, in coordination with the Saudi Student Clubs in Australia. SACM has announced the relevant timetable and the names of proposed speakers on its website and through its accounts on social media. For more information, refer to “Vision Features” page on SACM’s website.

The forum can be viewed on this link