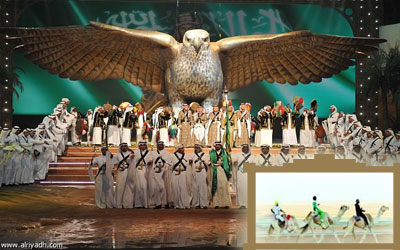 Custodian of the Two Holy Mosques, King Salman Bin Abdulaziz, patronized the opening ceremony of 30th Janadria Festival on February 3, 2016 in Riyadh, Saudi Arabia. The Janadria Festival, organized by the Saudi Ministry of National Guard, is named after the village on the northern outskirts of Riyadh, where it is held annually to celebrate symbols of the Saudi identity. This festival is considered to be the National Festival of Heritage and Culture in the Janadria area of Riyadh. It plays a crucial role in preserving Saudi national heritage.

The festival begins with a traditional camel race and is intended to embrace all aspects of Saudi Arabian traditions and culture. A feature of the festival is the performance of traditional music by musicians from all over the Kingdom and national dances by folklore troupes. It also features events that revive the heritage through traditional buildings, handicraft activities displayed with modern audio-visual technology, including a theatre, performance halls, and model heritage buildings from major cities in Saudi Arabia. The Janadria Festival is the largest festival of its kind in the Gulf, attracting millions of visitors from all over the region each year. It started as a camel race event and, today, it represents a crossroads where poetry, intellect, culture, art, theatre, as well as heritage and history meet.
This year, the organizing committee of the Janadria Festival chose Germany the guest of honour country. The German participation took place under the slogan “Germany — Land of Ideas: Innovation has tradition”. Visitors of the Janadria Festival will be able to learn more about Germany and experience the rich diversity of German culture and traditions.