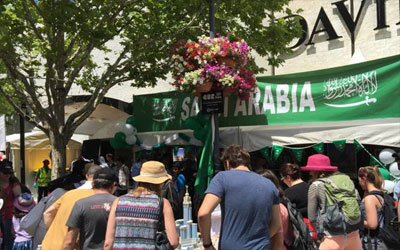 Events of the Australian National Multicultural Festival (NMF) 2016 were concluded in Canberra on Sunday, 14th February 2016. NMF is a major annual cultural festival which takes place in Canberra and attracts more than 250,000 visitors every year, including Australian citizens, residents and members of communities of various countries around the world. The festival was also visited by a group of Australian officials and representatives and members of diplomatic missions in Canberra, in order to see the culture and heritage of more than forty five countries which participated in the festival this year.

Royal Embassy of Saudi Arabia in Canberra participated in NMF 2016. Saudi Arabia’s stall contained a number of heritage and cultural material of Saudi Arabia. Visual and print materials such as images and maquettes of the Two Holy Mosques and tourist regions of Saudi Arabia, books, publications and documentaries, in both Arabic and English languages, that reflect aspects of the heritage and development of the Kingdom were also displayed in the stall.

Saudi Arabia’s stall has attracted a large turnout, where the visitors were welcomed and offered Saudi coffee, dates and sweets as a gesture of generous Arabic hospitality. The stall team also provided information on the exhibits and answered visitors’ questions.

On the other hand, a group of Saudi students, in coordination with the Saudi Student Clubs in Canberra and Sydney, performed Saudi folkloric popular dances, among a number of other presentations representing various countries.

The National Multicultural Festival of Australia is one of the most important cultural events sponsored by Australian Government. It is organized during the first two weeks of February of each calendar year. NMF provides an opportunity for citizens, residents and visitors in Australia to view the heritages and cultures of different peoples and communities living in Australia. Various countries, represented by their embassies and cultural missions, have always been keen to participate in the festival to show their heritages, cultures and achievements to the Australian society.