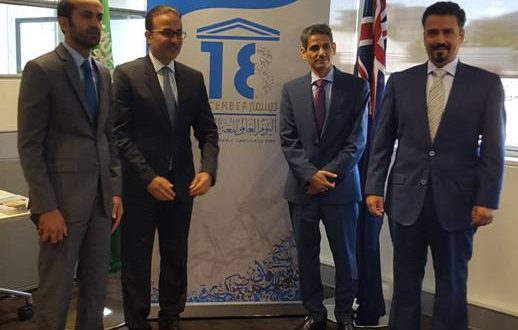 Saudi Arabian Cultural Mission (SACM) in Australia organized an event celebrating World Arabic Language Day 2016 at SACM’s premises in Canberra. The event was attended by a number of Arab ambassadors and Cultural Attachés and representatives of educational institutions in Australia.

Saudi Deputy Ambassador to Australia and New Zealand Meshaal Alrougui delivered an opening speech, and welcomed the attendees for honouring the event. He spoke about the importance, number of speakers and uses of Arabic language globally. He also pointed out to the efforts of Saudi Arabia in the service of Arabic language, through several projects and programs run by institutions and centres interested in promoting Arabic language, such as King Abdullah Bin Abdulaziz International Centre for Arabic Language Service, in addition to international events, prizes and cultural weeks.

Saudi Cultural Attaché-Designate to Australia Dr. Abdulfatah Bin Jameel Bostanji, delivered a welcoming speech. He valued the event and pointed out to the importance of the Arabic language and the role it has played in the formation of the civilizations of many nations and enriching multilingualism in all parts of the world. He further reiterated the considerable efforts made by Saudi Arabia in promoting Arabic language during the past few years, evidenced by establishment of Arabic language faculties in several government universities. Dr. Bostanji also stated that SACM pays special attention to the World Arabic Language Day and has been celebrating it annually, in collaboration with interested centres and institutions in Australia and Saudi Arabia, with the support of Saudi Ministry of Education and King Abdullah Bin Abdulaziz International Centre for Arabic Language Service. Dr. Bostanji regarded the event as a good boost of multilingualism, and wished the organizers and participants the success in their endeavours toward promoting Arabic language. Other speakers in the event included Adam Konda Imam of Canberra Islamic Centre; Mr. David Johnes principal of Islamic school of Canberra; Ms Belinda Kyatt a student at ANU’s Centre for Arab & Islamic Studies.

Two short films about Arabic language were presented in the event – a film prepared by SACM’s Department of Cultural & Social Affairs and another was participation from a student of Princess Nourah bint Abdulrahman University in Saudi Arabia. The event was concluded by honouring some participants, including the two winners of SACM’s exhibition contest which was part of the event. The contest included a variety of creative Arabic calligraphy works featuring sculptures, paintings and designs, which were contributed by Saudi scholarship students in Australia.

World Arabic Language Day provides an opportunity for the organizers and participants in the event and for all keen people around the world to celebrate the Arabic language and places great value on multilingualism.  It is annually celebrated across the world to highlight the historical role of the Arabic language in science, research and the dissemination of knowledge, and to also highlight the importance of multilingualism. On 18th December 1973, the UN’s General Assembly included Arabic among its official and working languages, endorsing a proposal submitted by Saudi Arabia and Morocco.