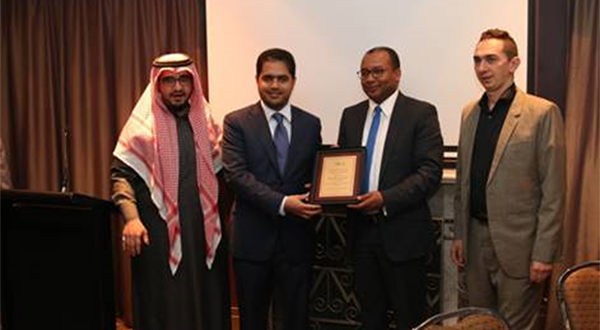 The ceremony took place in the Grand Ballroom at Hyatt Hotel in Canberra and attended by SACM’s employees, Deputy Attachés and heads of departments.  After verses of Holy Quran, the celebrants delivered speeches of acknowledgement and appreciation of Dr. Bin Taleb’s achievements and wished him success. They also highlighted the programs and initiatives implemented during the four years of his commission.

Dr. Bin Taleb thanked SACM’s employees for the ceremony and appreciated their cooperation and their outstanding efforts, which have had a deep impact in achieving SACM’s objectives. He wished them every success. The celebrants handed the Cultural attaché a memorial shield in expression of their appreciation and thanks to him.

SACM’s Saudi staff also hosted a dinner in honor of the Cultural Attaché, which was attended by H.E. the Saudi Ambassador to Australia, his deputy and directors of the embassy.

Dr. AbdulAziz BinTaleb is one of the academic staff at College of Education, King Saud University in Riyadh. In 2005, he received a PhD from The University of Texas at Austin, USA. Dr. Bin Taleb is a researcher and author in the field of scholarship. He authored the book “Studying Abroad” and the book “The Upcoming Oil”. He also supervised development, publishing and translation of 15 publications of SACM. In September 2012, Dr. Bin Taleb was commissioned as the Saudi Cultural Attaché in Australia, where he first held the position of Academic Director for Victoria.

During his commission, SACM implemented significant development programs and quality assurance initiatives, including the orientation, evaluation and communication enhancement initiatives. This is in addition to promoting SACM’s cultural role.