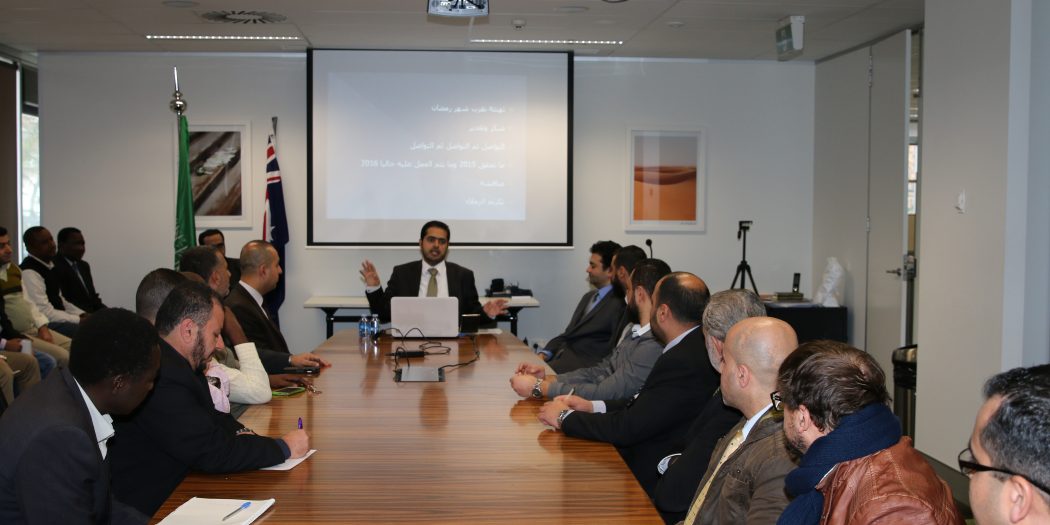 Dr. Abdulaziz Bin Taleb the Saudi Cultural Attaché to Australia, met with SACM’s staff in the main hall at SACM’s building, in the presence of Deputy Attachés, heads of departments and employees. In the beginning of the meeting, the Cultural Attaché congratulated the attendees on the approach of the holy month of Ramadan and urged them to exert more efforts in expediting completion of the transactions. Dr. Bin Taleb also highlighted the importance of communication and enhancing the response to the highest possible level. “There is need for increasing our efforts, especially in stressful times like the beginning and end of the academic year.” The coming period will witness the holy month of Ramadan, end of an academic Term, finalization of graduation process and opening files for new students, said the Cultural Attaché.”

During the meeting, achievements including the programs and initiatives implemented during the past year and the results of students’ surveys have been highlighted. Follow-up and evaluation methods have also been discussed toward performance enhancement.

The Cultural Attaché also reviewed new initiatives currently in process. At the end of the meeting, after discussions and questions, a group of diplomats and local staff members were honoured on their end of service.

SACM usually organizes two meetings every year attended by the Cultural Attaché and SACM’s staff, in order to discuss and evaluate the work procedures and previous initiatives, as well as discussing future visions and plans.