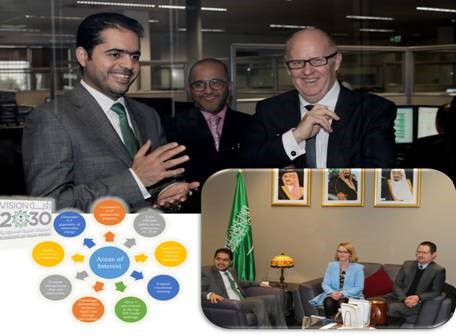 The Cultural Attaché toured with the delegation throughout SACM’s departments, explaining the role of each department and highlighting SACM’s contribution to enriching educational, cultural and scientific exchange between Saudi Arabia and Australia. The delegation was also briefed about the services and support SACM provides to Saudi students in Australia and their companions, as well as SACM’s initiatives and development programs.

A meeting was held at the office of the Cultural Attaché, discussing and addressing a number of issues related to Saudi students in Australian universities, in order to facilitate their study and academic life. Ways to strengthen the relations between SACM and Australian universities were also discussed. The meeting included a presentation about Saudi Arabia’s Vision 2030, highlighting co-operation opportunities between Saudi Arabia and Australia offered by programs and initiatives of the Vision in educational and cultural fields.

Universities Australia is the peak body representing the university sector with the decision makers in Australia and the world.